The exhibition 'When the gaze touches the world Pictura & Nomenclatura' 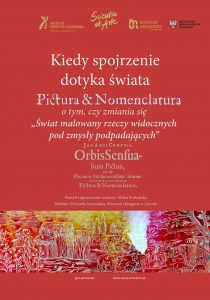 In the hall of the building of the Institute of Human Genetics, Polish Academy of Sciences a new exhibition from the series Scientia et Arte is presented. The exhibition is entitled When the gaze touches the world. Pictura & Nomenclatura and is dedicated to Jan Amos Comenius’s most outstanding work Orbis Sensualium Pictus, which is was the first illustrated encyclopedia for children, consisting of 150 chapters.

The book has been translated into several languages. More than 200 editions of Orbis sensualium pictus have been published over 200 years.

Jan Amos Comenius (1592-1670) was a Czech educator, theologian and philosopher. In the years 1628-1656 he lived and conducted his scientific activity in Leszno, Poland.

The exhibition is organized in cooperation with the Regional Museum in Leszno.

Prof. Michał Witt was appointed Director of the Institute of Human Genetics, PAS 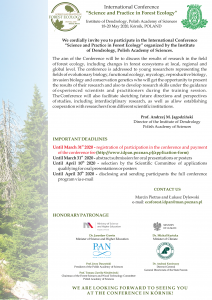 KThe effects of climate change are already observed and involve not only ecologically and economically important species of trees, but also the related species of other plants, fungi, and animals. The conference “Science and Practice in Forest Ecology” will be a research-discussion forum during which the latest results of research in the field broadly understood as forest ecology, including changes in forest ecosystems at local, regional and global levels, will be discussed. The conference is addressed to researchers representing the fields of forest science, evolutionary biology, functional ecology, mycology, reproductive biology, invasion biology and conservation genetics, who will get the opportunity to present the results of their research and to discuss its applications in sustainable forest management and nature conservation. The participants will be able not only to complement their current knowledge and exchange their experiences and ideas, but also to develop research skills under the guidance of experienced scientists and practitioners during the training sessions. The conference will also facilitate sketching future directions and perspectives of studies, interdisciplinary research, and establishing collaborations with researchers from different scientific institutions.

Prof. Paweł Krajewski was appointed Director of the Institute of Plant Genetics, PAS